The founder and mastermind behind Harzfein definitely belongs to the roots of German Hip Hop culture. Even though Magic Mayer was already into music very early; tapes were recorded and sold, Herbie Hancock’s “Rockit” should influence his life like no other track before.

It was the year 1983. It was the power of that new sound, electronic, funky and completely different, that was more than only music to him: If became his philosophy of life. That was followed by the formation of the “Stretch Breakers” with whom Magic Mayer danced to become the GDR champions of 1986.

A story of success which continued with the crew “Moves from the other side” who won the title “East German Champions” in 1998 and the second place of the German championships. That this part of German Hip Hop history is worth telling gets proven by the award winning documentary “Here we come” by Nico Raschick. That movie in which DJ Magic Mayer is one of the main protagonists authentically represents the opinion of generation that has not been asked so far. 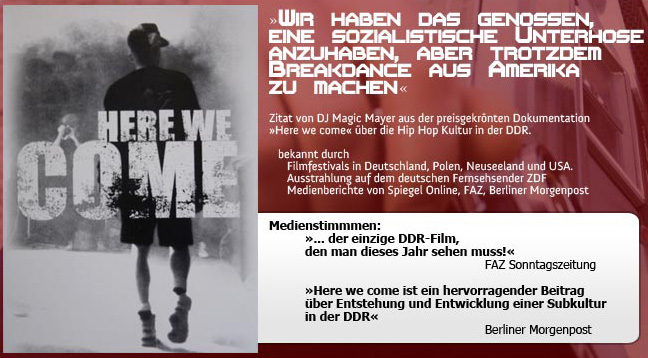 Magic Mayer started DJing in 1992 and had the first Harzfein Records release finished two years later. The legendary "Paco-Mixes", the RIAS Dance Show and the radio shows on DT64 were very influential to him.

As Resident-DJ at the Tiffany disco in Dessau from with the first 100% Black Music Floor in East Germany, Magic Mayer shaped his roots as a pioneer for the East German Black music scene from 1995 to 1996.

Mike found his way to become the Resident-DJ in the famous Black Music club  "Bounce 87" through the well-connected Hip Hop scene. A principle that was already valid before 1989 of course and is valid until today: Resourcing to the people close to you to support the home base.

By now Magic Mayer has added another facette to his eventful career in from of the turntablism. The idea: Not only mixing tracks into each other but using the scratches and backspins of the "wheels of steel"   as an independent instrument. Aside from that Magic Mayer is constantly working on new tracks. So it is certain that there is going to more by DJ Magic Mayer in the future.